Often the easiest way to get better foods is to do more of the work yourself. If you have all the money in the world there are some commercial whole grain sourdough breads that might be okay. But no bread company uses probiotic yeast in their ingredients. 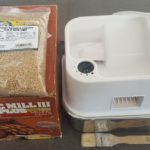 In a recent newsletter I told of the origins of white flour, and the folly of fortified flour. This built on my 2017 blog post about making whole wheat bread. Traditional breads are made with yeast, and have advantages over quickbreads (cakes, etc) made with baking powder.

Supplements of brewers yeast or nutritional yeast are sold by most natural food stores. Brewers yeast is a byproduct of brewing beer. Nutritional yeast is often grown on Molasses. Both types of yeast have most of the B-vitamins: B1 (thiamine), B2 (riboflavin), B3 (niacin), B5 (pantothenic acid), B6 (pyridoxine), B9 (folate), and B7 (biotin, aka Vitamin H), and the micro nutrient selenium. Neither kind of yeast has Vitamin B-12 (synthesized by bacteria). Brewers yeast has the trace mineral chromium, which is not found in nutritional yeast. Many nutritional yeasts are fortified with extra synthetic B-vitamins, including Vitamin B-12. [I avoid fortified yeasts on principle, and because some people cannot turn synthetic folic acid into Folate/Vitamin B-9.]

Some businesses sell ‘sourdough starter’. While these start out with “San Francisco” yeasts in the package, the yeasts in your kitchen will eventually replace the strains in the starter.

I make my own sourdough starter using the Saccharomyces Boulardii yeast supplement. This yeast is said to be an ‘honorary probiotic’ because it helps suppress pathogenic bacteria in the intestines:

When used for making sourdough bread, this yeast is a very slow yeast. I’ve settled on letting my dough rise for 24+ hours before baking it.

The first antibiotic, Penicillin, was isolated from a Penicillium fungus. Yeasts are a type of fungus. I think the various yeasts used by humans — as Sourdough bread, Vegemite (Australian food product made from brewers yeast), brewers yeast, etc — have compounds that suppress bacterial levels in the intestines. Some of the other yeasts have pathogenic properties (mold, fungal infections, etc).

Edible yeasts aren’t entirely made of fairy dust, as some of the compounds are phytoestrogenic (causing tissues to swell & divide). “Yeast Extract”, on many ingredient labels, is code for Monosodium Glutamate (MSG), the excitatory substance that many try to avoid.

To make good whole wheat bread it’s best to use freshly ground flour. This is not so easy in our modern world: Michael Pollan’s book Cooked said every community used to have a flour mill, but these all went out of business when the flour industry switched to selling white flour.

Pollan’s book featured discussions with the founder of Community Grains in Woodland California. This section in Pollan’s book also talked about how modern wheat strains are very bitter as whole wheat bread. Wheat strains with higher protein content are easier to make into white flour. Softer wheat has less protein, is less bitter, and is more like the wheat humans ate 200+ years ago.

One of my local natural food stores has packages of ground whole wheat flour in their refrigerator. Whole wheat flour can be stored in the freezer to keep it fresh longer.

My mom bought a wheat grinder in the 1980’s, and passed it on to me when she moved a year and a half ago. She also found a similar model at a yard sale 15 years before.

I pilfered a stand mixer from my mom’s 97-year old friend, when they were selling her house. KitchenAid has an attachment for grinding wheat.

If you don’t have any equipment to make bread, you can make your grains more digestible with a variety of strategies. There are many videos on youtube about nixtamalization. Most Mexican grocery stores have packages of hydrated lime:

Nixtamalization is the process where corn kernels are boiled in an alkaline solution. This process makes other grains more digestible too. Specific wood ashes were traditionally used, but lime powder is just as effective.

Most grocery stores sell masa harina that’s ready to use. Bob’s Red Mill Organic Masa Harina is available at Kroger’s and other grocers.

Fruits, Potatoes and Sweet potatoes are very good foods for humans, as they provide the glucose required by our brains and alkaline minerals.

Edible seeds (Grains, beans, legumes) are useful to humans because they store easily. They’re problematic for us because of chemicals that inhibit digestion. Seeds can be made more edible with a variety of simple strategies.

The proteins in animal products and seeds contain sulfur and phosphorous, which metabolize into sulfuric acid and phosphoric acid. Proteins need to be balanced by an adequate intake of alkaline minerals, from fruits, vegetables, milk or supplements.