Red Light in the Cayce Readings

15. Each day, also, there should be at least three to thirty minutes – dependent upon the vitality of the body – of the Infra Red light given, that the very structural portion of the bone themselves may be enlivened, that the red blood corpuscles may become more active and more numerous in the system. These should be altered from the cerebrospinal – or with the body lying on the face, also with the body lying on the back – these changed about from day to day, that we may have the activity of same in ALL PORTIONS of the bone. The ribs, the neck, the head, the back, the hips, the lower portion of the limbs – ALL of these should have their portion of THIS activity.
Edgar Cayce (602-1, F-37)

I’ve previously used heat lamps and red LEDs. This is the prototype Red LED light I built for a friend: 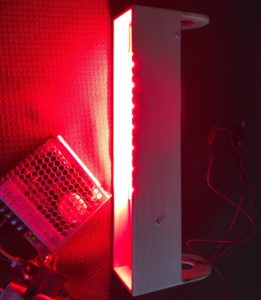 “Just three minutes of exposure to deep red light once a week, when delivered in the morning, can significantly improve declining eyesight, finds a pioneering new study by UCL researchers.”

The light used by these researchers was not especially powerful. You can get three minutes of red light for free from the sun: close your eyes and direct your face towards the sun. As the reports say, this is most effective when done in the morning. Heat lamps are an inexpensive source of red light, if you live somewhere where the sun is not available.

One aspect of “cold and flu season” is the changing amount of light we get with the seasons. Vitamin D comes in a pill. There is no pill form for the regenerative effects of red light on the mitochondria.

Quick update: I was asked about a ‘cyber monday’ special. Hmm… Sure? My coins aren’t very scientific, but I have my anecdotes, and lots of repeat customers. About 6.5 years ago I gave a ‘grounding coin’ to a woman I thought really needed it. She immediately noticed the effect. I’ve spent most of the last 6 years trying to protect this friend from the medical system, which is often more aspirational than effective. Sign up for my email list for my occasional emails – I think I’m about to have a decisive victory for natural health over the cruder types of medicine that are sort of like modern bloodletting.

SPECIAL: For December 2021:  ‘Cold’ Grounding Coins are $2 off ($5/coin); Pendants are $1 off ($7/pendant). Use coupon code freeship2 for $3.50 off orders of at least $47. (I’m still not able to ship to Australian or New Zealand, but a customer found Ship7.com, which helps people to consolidate packages from the US to the rest of the world.)

All orders include a short report about how to be resilient during cold and flu season, including a bit about the seasonal use of light.