I received an email from a customer in Australia on October 1 2021:

Thank you for the 2 [grounding] coins. I tried to buy a cold coin from [Official Supplier] last year but they wanted $70 to deliver it to Australia, and they wouldn’t move from that price. Mate, if you can, start selling more Edgar Cayce products. Thanks again, Good Wishes for the future!

(My version of the Cayce ‘Coin that Prevents Colds’ are called Grounding Coins. I also sell Grounding Pendants, which have more metal than one coin but less than two.)

Over the last 12+ years, I’m pretty sure I’ve sent more packages to Australia than to Canada. Maybe one of you knows how it is that Edgar Cayce gets more traction in Australia than England or Canada?

Also on October 1, I noticed that the USPS is temporarily suspending shipments to Australia, New Zealand: USPS: International service disruptions: 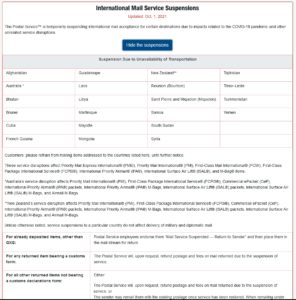 I think the main reason is there aren’t currently enough flights to Australia. UPS quoted me about $80 for shipping a small package to Australia. I’ve temporarily removed all shipping options for Australia and New Zealand. I’ll restore shipping to Australia and New Zealand as soon as I get notice the U.S. Postal Service has restored this service. If you need to order enough that $80-$100 in postage would work, please contact me at james@teslabox.com and I’ll figure it out.